Rasta scores crowdless caves to himself in this short clip by Kaius Potter. Rasta is one of those surfers that doesn’t need to do much on a wave for you to get excited. His effortless style mixes with powerful rail surfing that’s simple but mind blowing at the same time. There is no need for air reverses when watching Dave surf, he simply knows how to ride waves, making him look wise and at one with his craft. Rasta previously rode Formula Energy Surfboards before switching the Gary McNeill’s new project Gary McNeill Concepts. Check them out for a good mix of finely tuned high performance whips and some great everyday surfers, yew.

Craig gives you a break down on what Haydenshapes boards he has been surfing and what conditions they work in. Ando goes through all his popular models from the Hypto Krypto to the Psychedelic Germ, The Ando, Merlot and the popular Cannon single fin. Ando surfs just about everything with this quiver from pumping Teahupoo to dredgey lefts in Africa and Aussie beach breaks.
11/4/2013 3:13 PM 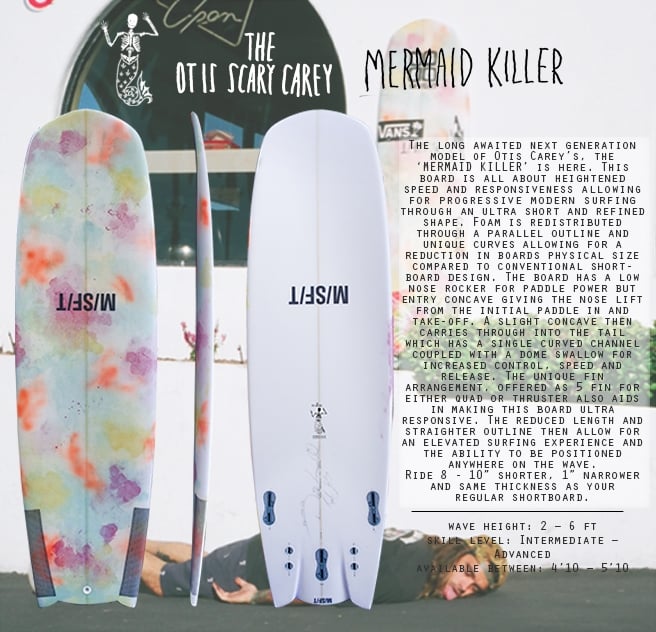 The Future of Surfboard Design

Red Bull Decades Episode 6. The Red Bull team take a look at the future of surfboard design with three modern shapes. From a Meyerhoffer single fin to a Maurice Cole deep single concaved hybrid to a wake board looking Tomo by Dan Thomson. The guys put these unique shapes through the paces and provide some interesting feedback along the way, around what they think the future of surfboard design will look like.

Dave Howell and Otis Carey have just released the newly refined Mermaid Killer into the Misfit Shapes family. Otis has been surfing this new generation Mermaid Killer in a range of conditions over 2013, working closely with Dave to refine his signature shape for his fast, progressive style of surfing.
12/16/2013 2:42 PM

Mick Fanning has secured his third world title at the Pipeline Masters on the North Shore after a golden season of surfing. Darren Handley and the DHD Surfboards team have Mick’s quiver dialed in. To check out Mick’s signature models and the full DHD collection, Click Here.
12/16/2013 2:49 PM

Mick gives us an insight into his year and his campaign on the North Shore. Mick sheds light on his world title win and the roll coaster ride he took to become our new world champion. Mick and the DHD team have got his boards spot on this year and the DHD Surfboards collection is one not to be missed when looking for a performance focused model to take your surfing to the next level.

Chat live with our surf experts at Boardcave to organize your next custom with Darren and the DHD team.

Follow the adventures of Beau Foster as he adventures through Australia, California, France, Portugal and magical Indonesia in his new short RAINBEAU. Beau likes to put his feet on Haydenshapes surfing boards.
1/20/2014 2:27 PM

Pro surfer/model Alana Blanchard on her road to last year’s US open. TV commercials, fashion shoots and surfing competitions, Alana is one busy lady. She is quickly becoming a well known star in the sporting world with her looks and surfing ability influencing thousands of girls around the globe, the boys also seem to enjoy Alana and her adventures.
1/21/2014 2:21 PM

Matt Banting is one of the best up and coming surfers in Australia and will be one to watch in the coming years. If all goes to plan Matty will soon end up on the world tour slaying some of the big names. Matt has a promising future ahead and we are looking forward to seeing some career highlights in the near future. Matt Banting also rides DMS Surfboards and their Carbon Wrap models, he also surf’s Shapers Fins helping test and refine their fin collection for all conditions.
1/22/2014 2:14 PM

Watch Peter Mendia journey for one year through Hawaii, California, Florida, Nicaragua, Indonesia, the Bahamas and Mexico to find waves, not a bad year to look back on, yew.
1/24/2014 2:11 PM
208 items found
Page
Sort
Filter