RovR is a premium manufacturer of world class outdoor and camping products, best known for their RovR RollR Cooler. The company originally set out to create an all-terrain, durable, tow-ready, versatile cooler that can handle the abuse of the outdoor living. Launched in 2018, RovR has since released their series of feature packed RollR coolers that have become popular among beach goers, campers, and anybody who loves the outdoors.

Top on the list of RovR’s products is their RollR Coolers that are designed to go almost anywhere. These coolers features some of the coolest innovations we have seen including puncture-resistant tires, a wagon bin that provides additional carrying space, and anchor points for camping accessories. RollR coolers also offers the best in terms of storage capacity when compared to similarly sized coolers. Its Deepfreeze dry bin technology also keeps all your goods cool and organized while keeping them dry for up to ten days.

RollR Coolers are available in 3 different sizes: RollR 45, RollR 60 and the largest on offer is the RollR 80 with a large 80qt capacity.

Founded in 2018, RovR is quickly becoming a popular brand relied upon by outdoor enthusiasts. RovR Coolers are best known for their innovative add-ons that push the boundaries of what is capable from a cooler. RovR coolers feature puncture-resistant tires, a wagon bin that provides additional carrying space, and anchor points for camping accessories, a bicycle tow kit (BikR Kit), cup holders, food prep board, an umbrella/fishin rod holder and more. All this, coupled with the highest storage capacity in its class and up to 10 days of ice retention ensures this will be your go-to cooler for years to come! 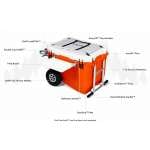 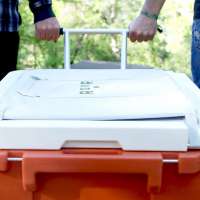 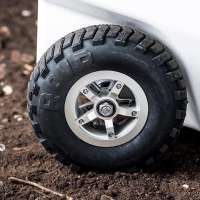 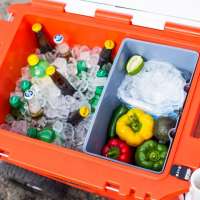