What are the different kinds of longboard fins and how do you choose the right one?

How do I pick the right longboard fin? Back in the day, this was not an issue. It's kind of hard to imagine it, but there was a time that did exist in surfing where the only 'fins' that mattered were those that protruded out from the sea as a beast lurked below.

It wasn't until the thirties that the keen eye of Tom Blake decided to attach an old, small boat hull to the bottom of his also innovative hollow surfboard, to create the concept that became the first actual surfboard fin to exist.

Where surfers once had to drag a free foot in the water to control their speed and initiate any type of turn, Tom’s little invention quickly gained popularity, and now us modern, rather spoiled surfers probably haven't seen a surf session without a fin.

Fins allow us to perform radical and incredible maneuvers on a wave and in the air, and without them, progressive surfing and big wave riding would not be possible. But aside from shortboard tri and quad setups that are intricate and technologically advanced, longboard fins have also evolved from the glassed-in counterparts we once knew to very progressive shapes, designs, and materials. If you're interested in reading more about fins, in general, be sure to check out our definitive Surfboard Fin Guide and Glass On Fins.

If you have ever wondered what kind of longboard fin is right for you based on your longboard, the waves, and the kind of logging you like to do, we got ya totally covered. If you're new to longboarding and want to learn more about the different types, see our So You're Thinking of a Longboard article for an explanation on the different types out there.

We're going to get into all the different kinds of longboard fins and the unique personalities they provide so that you can easily understand their purposes, and we'll include a few tips on how to best position your fin on your longboard. Quickly jump to the sections, using the following links:

The Different Kinds of Longboard Fins

Longboard fins, and fins in general, act as a point of hold within the water so that you can control the movements of your board in conjunction with the water flow beneath you, as the fin influences the hydrodynamics of lift and drag, allowing you to turn the surfboard and control the speeds.

Different shapes and sizes of fin then result in different ways of which this water flow changes, and thus different movements and possibilities provided to your logging.

With this, there now exists a plethora of longboard fins to choose from, so let's get into how each of them rides and why this matters.

This fin is purely classic. Modern D fins are a testament to the old school design that took the surfing world by storm when everyone was riding massive, heavy logs that required a lot of fin in the water for any type of board control.

D fins are shaped like a big, colored in “D”, granting them not only their name but also their large surface area that is the reason for their ability to create solid hold within the water.

The bigger the fin, the longer it takes for water to move around the shape of it and the harder the water has to work to change any movements. And D fins are quite large. With this comes a ton of control.

This control is excellent for surfers who only want to cruise stylishly down a long, open line and trim with ease on the face of a wave. This means that D fins are perfect for really long, heavy, and old-school boards and a surfer who simply wants to ride like the old days.

Although you might think a D fin is perfect for noseriding, this can be a little misleading, as the short and stubby shape can actually create a little instability as your weight transitions to the nose. For more stability in a noseride, you need a fin to not only be wide in the water but also deep, so a D fin really only checks off one of those boxes.

Summary: D fins provide you the best trimming abilities and are meant for cruising straight and steady down a line on a big longboard.

A pivot fin is your go-to date if you love long walks on the beach at sunset.

But seriously, pivot fins are made for noseriding and boards destined for cross stepping, so if this sounds like what you want to do, then this is the fin for you.

Pivot fins are nice and long, and being further down it the water allows them to maintain a steady hold on the tail end of your board as your weight transitions to the nose. This length also allows the surfer to pivot the board for direction changes and locking into the right noseride section.

They are also pretty bulky with a mellow, rounded nose for increased surface area and even more steadiness in a noseride. It takes more than just a pivot fin to be able to noseride. Check out our How to Noseride guide for more tips and tricks to this art.

Summary: Pivot fins allow for easy, controlled noserides and slight maneuvering on the face of a wave. Great for classic noserider logs or for increasing a hybrid longboard's ability to noseride.

If you haven't noticed, a lot of longboard fins are named after their shape. So yup, a hatchet fin sure does resemble the sharpened head of an ax.

Hatchet fins are essentially a nice way to meet in the middle between a D fin and a Pivot fin. They are really wide at the end of the fin, just like a D fin, for optimal hold down the line and for easy trimming. But hatchet fins are also a lot longer than a D fin, and the extra length in the water allows them to help the tail stay better locked in when you walk to the nose.

This will keep you really steady through your entire cross step, your noseride and trimming while allowing for direction adjustments to also be made from the tail.

Summary: A do it all fin shape for mellow trimming, smooth nose rides, and slight turns from the tail.

Flex fins begin with a nice, strong base and protrude outward into a really thinned out nose and narrow tip. These fins are then subject to much more sensitivity in the water, as their design and flex allow for the energy of the water to pass through the fin so that your movements are efficiently carried out when turning, making them great for adding a little pizazz and performance to your log.

Because there isn't a lot of surface area on a flex fin, your longboard will have a lot more freedom to maneuver and turn in the water. This allows for more intense cutbacks and carves and makes a longboard surf a little bit more like a shortboard.

Summary: Flex fins are meant to enhance the turning ability of longboards and fun shapes and are great for performance logs or for increasing the turnability of hybrid longboards.

The All Round Fin

If you are looking for a fin shape built based on versatility, then an all-around fin should have your surfing covered for the whole year.

If you told someone who doesn't surf to draw a fin, the result would probably look like an all-around fin shape, as they are classic, simple, and straightforward.

They are nice and wide throughout the base and up to the nose of the fin granting the longboard hold and stability, especially when noseriding and trimming. But all around fins are also just thin enough and flexible enough so that when it's time for a nice swooping carve you can easily adjust your movements, as they also allow for some really solid performance and drive.

You can use an all-around fin as a single fin or with side bites to spice up the turning action of these fins, and if you aren't sure of your surfing style or if you like to do it all, this type of longboard fin will be perfect for you.

Summary: All around fins are perfect for any type of longboard and surfer, as they allow an even ability to noseride, turn, and trim throughout a range of wave conditions.

What Size Should My Longboard Fin Be?

In general, for any fin that maintains a focus on noseriding, size that fin 1 inch for every foot of the board (10ft board = 10in fin).

Flex fins are usually sized up due their narrowness and reduction in area. If the fin is really narrow and thin, then a larger flex fin can usually be ridden with a shorter Longboard. (9ft board = 10in Flex fin)

If you are looking at increasing your ability to turn, then you're probably best off on a Single fin plus trailer fin set up, which will allow you to size your single fin 2-3" shorter.

Where Should I Place My Longboard Fin?

Longboard fin placement affects the way your board will turn in the water. The closer to the tail you screw your fin, the better the fin will hold during noseriding. The further up towards the nose, the looser and easier to turn your board will become.

Choosing where to place a fin starts with what you want to do and the type of fin. If your fin is something like a flex fin and meant for turning, you'll probably want to place it close to the tail, and if it is a noseriding fin like a pivot fin, you want more in the middle/towards the top.

The cool thing about fin placement is the fact that you can make a noseriding fin turn a little bit better or make a performance fin hold a little better in a noseride simply by where you place it. Once you understand your board and the type of fin you have, enjoy messing with this placement to find exactly what feels good to you or depending on the types of waves!

For tips on noseriding, check out our How to Noseride guide. 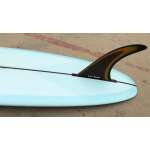 Perfect positioning of this single fin by Captain Fin Co.

SIGN UP
© Copyright 2010 - 2021 - Boardcave USA ~ The Surfers Store. Aspects of this portal are patented, patent-pending, or patent-applied-for. - Powered by Cavewire: